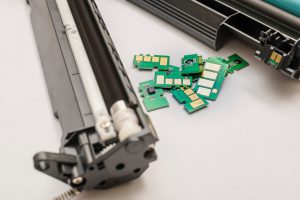 The practice of removing the chip from an empty OEM cartridge to fit onto a cheap non-OEM newbuilt creates more unnecessary waste and use of natural resources, and may be unlawful says ETIRA, the body that represents the European remanufacturers of OEM toner and inkjet cartridges.

Javier Martinez, president of the European Toner and Inkjet Remanufacturers Association (ETIRA), said: “Today, most OEM printer cartridges have a chip that contains embedded software that allows the cartridge to function in the printer. After first use, that cartridge may be remanufactured to be used as a cartridge again. To do so, third-party remanufacturers like ETIRA members need to either replace the chip with a non-OEM chip sourced from a third-party manufacturer or reuse the original chip.

“Regrettably, replacing the chip on a cartridge is not always possible, as most OEM’s have designed their cartridges for single use only (SUC’s) and do not endorse the reuse of their cartridges by remanufacturers. Consequently, the chips‘ codes are not freely available to third parties and codes are increasingly complex to be reverse-engineered by a third-party manufacturer. In those cases, the only way to remanufacture the OEM cartridge is to reuse the OEM chip.

“A recent trend to overcome this issue is that some non-OEM newbuilt single-use cartridges from Asia are now being marketed in Europe but without a chip. And they are being sold at prices sometimes even below the cost of an empty OEM cartridge due to their extreme low quality. To activate these cartridges and make them functional, some market players remove the chip from an empty OEM cartridge and then place that chip on a new non-OEM cartridge.

“We would like to make it clear that using an OEM chip on a non-OEM newbuilt cartridge maybe a violation of the intellectual property rights of the OEM. But more importantly, it is anti-environment as reusing an OEM cartridge can save up to 45%-60% in CO2 emissions and save natural resources like oil, aluminium and timber.

“Removing the chip from an OEM cartridge to use on a new non-OEM cartridge means that the OEM cartridge cannot be reused. The cartridge will be wasted and will need to either be recycled or, more commonly, sent to a landfill., creating more unnecessary waste and consuming more natural resources.

“In addition, it is extremely doubtful that the non-OEM cartridges comply with other regulations protecting the environment and health such as RoHS, REACH and WEEE.

“As such ETIRA is calling on all concerned to remanufacture only the original OEM cartridges so to avoid both potential legal action and contributing to what is an environmental disaster.”